Still doing business the way we did when we started in 1925.

1920: The "Roaring Twenties" was the decade when Americans began discovering the joys of modern sewer systems and indoor plumbing. It was an era of prosperity, but for many teens it was a time when high-school education played second fiddle to supporting their families.* This was true for our founder, Edward J. White. At 16, Ed quit high-school and went to work as a Plumber's Helper.

1927: As "Lucky Lindy" rose to fame, Edward J. White Plumbing and Heating had its feet well off the ground as well. When the business grew too big for his home, Ed rented half the building at 1011 South Michigan Street, South Bend, where the company remains today.

1937: The owner of the building lost it due to the depression. Although growth in the business was slow, at the bank's suggestion, Ed purchased the building.

1946: At the end of WWII, knowing that design and build work was the key to growth, Ed decided to hire Fred Hotop. Fred was leaving the army after service in England. Ed knew that at least one of his competitors was after Fred's services. In a pro-active move, he picked Fred up from the airport and persuaded him to come to work for Edward J. White, Inc. Fred stayed with the company as a designer and draftsman for many years.

After the war, the economy boomed and growth was rapid. The company purchased the two lots across the alley to build its first warehouse. Since that time, the company has continued to prosper and has purchased properties surrounding the original building to allow for growth and expansion.

1954: Edward J. White remodeled, combining the company's separated store fronts into one office building and added a warehouse to the back of the building.

1989: The company purchased the building to the north of the offices for use as an extra warehouse and the addition of a prefabrication shop.

1992 to Present: In 1992, Paul and Joe White restored the company's 1929 Model-T Panel Truck. Four of Ed’s five sons, four of his grandchildren and one great-grandson have worked at the company at one time or another beginning with Ed's oldest son, Richard.

Paul White, CEO: Paul started working for the company after school in grade school. Working at Edward J. White. Inc. is the only job he has ever had. Graduated from Notre Dame with a degree in Mechanical Engineering in 1960. He is a past President and former Board of Director member of the Saint Joseph Valley PHCC. Paul also served for many years on the Labor Relations and Apprenticeship committees.

Joe White, President: Also a past President as well as a current member of the Board of Directors of the Saint Joseph Valley PHCC, Joe oversees the day-to-day operations of E.J. White, Inc. and estimates and manages our small to mid size construction projects. Joe graduated from Purdue University with a degree in Building Construction in 1991.

Jeff Bucher Jr., Vice President: Jeff graduated from the Plumbers and Pipefitters Local 172 Apprenticeship school in 2005. He estimates and manages our mid to large-scale commercial plumbing and HVAC projects.

Mike Taylor, Controller: After graduating in 1982 from Northwest Tech with a degree in accounting, Mike went to work for Redi-Froz. Mike joined our company in 1990. Mike is our controller and handles all of our accounting duties.

Chris Harrison, Service Manager: With us since 2018, Chris manages the Edward J. White, Inc. service department and assists Mike with some of our accounting duties.

All of our service technicians and plumbers are union trained and drug tested. We have a very low employee turnover rate. Nearly half of our team of 25 employees have been with Edward J. White, Inc. ranging from 15 to 40 years.

All of our employees are well experienced in plumbing and/or HVAC work. Most employees carry specialized certificates in their area of expertise: welding, HVAC, backflow prevention, and device testing. By employing a variety of knowledgeable and experienced personnel, we are able to solve almost every problem with speed, confidence and ease.

Have a Plumbing Emergency? 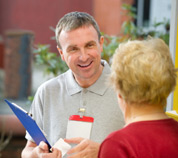 We believe you should have time to think and decide before you commit.

Click here to see how we do estimates and what you can expect when you call.